Will Making in Socially Distant Times 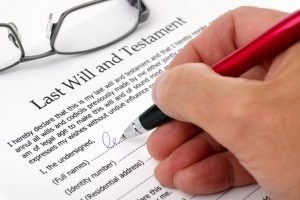 As we adjust to a life of Google Hangouts, Zoom meetings and Houseparties, it seems that very few physical encounters cannot be replicated remotely in some way or another.  Making a will, however, is an exception.

In England and Wales, in order to make a valid will you need to sign your will (or acknowledge your signature as your own) in the presence of two witnesses.  Each witness then needs to sign (or acknowledge their signature) in the presence of the testator.  What level of proximity amounts to presence, though? Eighteenth century case law established that ‘presence’ requires that the testator and witnesses are able to see the act of signature, but confirmed that it is not necessary for them to be in the same room as long as there is a direct line of sight between testator and witnesses (Casson v Dade (1781) 1 Bro. C.C. 99). Presence on the other side of a window or glass door would therefore be permissible; there have been recent reports of people signing wills on car bonnets or witnessing through patio doors to maintain social distancing. Private client solicitors have been working extremely hard as they strive to facilitate will-making that complies with the requirements, and have even been designated as key workers to reflect their important role.

Would video witnessing suffice?  In their 2017 consultation paper, the Law Commission expressed their opinion that it is ‘unlikely’ that video witnessing would satisfy the presence requirement, because the witnesses would not be physically present[1] although this has not yet been conclusively determined.  Therefore if someone tries to execute a will using video witnessing, it would not been known until after their death whether this was a valid will.  For people who are self-isolating and wish to make a will, relying on such a legally untested method of witnessing would be extremely risky.

Furthermore, in England and Wales, non-compliance with the formalities for making a will means the document is invalid; the courts have no discretion that would enable them to admit to probate a document where someone has tried, but failed, to meet the formality requirements.  The Law Commission’s 2017 consultation paper recommended the introduction of a ‘dispensing power’ that enables the court to dispense with the formalities if sufficient testamentary intention can be proved,[2] but their project to reform the law of wills was put on hold so they could prioritise their work on weddings. When that decision was made, no one foresaw that weddings would be practically impossible for much of 2020…

Many other common law countries already have dispensing powers, yet a growing number of jurisdictions have used emergency legislation to permit video witnessing of wills in certain circumstances.  For example, New Zealand have enacted the (snappily titled) ‘Epidemic Preparedness (Wills Act 2007—Signing and Witnessing of Wills) Immediate Modification Order 2020’, enabling wills to be signed by video link.  Similar provisions have been enacted in Queensland, Ontario, and numerous states in the USA. The Scottish Law Commission has also confirmed that video witnessing will be sufficient.

So, what hope for England and Wales?  Recently, Gina Miller and Baroness Kennedy called for oral wills to be permitted for all, ostensibly by extending the ‘privileged wills’ that members of the armed services can make when on active service. However, purely oral wills are fraught with difficulties. It may not be clear from an oral will (even if recorded) whether the testator had sufficient intention for it to operate as their will.  Cumbersome as the witness requirements are, they exist to protect testators from undue influence and to give them certainty that the steps they take will have legal validity.

The Law Society of England and Wales have confirmed that they are in discussions with the Ministry of Justice about a temporary relaxation in the formalities.  However, a recent written response in the House of Commons suggested it was unlikely that any changes will be made swiftly, and indicated that any changes would be in line with those suggested by the Law Commission in 2017.  At the time, the Law Commission rejected both oral wills and any extension of privileged wills beyond the armed forces.  Furthermore, they made no proposal to permit video witnessing; whilst it was discussed in the context of electronic wills, there was a great deal of prevarication about the introduction of these.  It was only the introduction of a dispensing power that was explicitly recommended.

It is, however, important to note that many of the jurisdictions that have recently enabled video witnessing in response to the current crisis already have dispensing powers so can admit informal documents (including video recordings and even text messages) to probate.  These jurisdictions arguably had no need to relax their formalities, but it is not surprising that they have chosen to do so.  My research has identified examples of will-like documents that were not admitted to probate under dispensing powers due to insufficient proof that the testator had adequately adopted the document as their will. Therefore whilst dispensing powers provide a far greater degree of flexibility than we currently have in England and Wales, they do not give the certainty to the testator or their family that we all need in these unsettling times.  Permitting video referencing as a way to make a valid will appears to be the safest way to facilitate will-making without losing sight of the reasons why formality requirements exist.

It looks increasingly uncertain that any changes will be introduced in time to take effect during the peak of the pandemic; it seems that our Victorian laws on making a will are set to remain firmly in the nineteenth century.  Whilst the line of sight test does not make it impossible to witness a will and comply with social distancing rules, it could deter people from making a will when they most need it.  The lack of a safety net for those who get it wrong would be less of a problem if our intestacy laws reflected the way we live our lives in the 21st Century, yet under our intestacy laws a cohabitant does not have any entitlement to inherit from their partner.  The comfort that most of us need at the moment is the knowledge that our loved ones will be provided for if we were to die.  Unfortunately, there could be many in England and Wales who will suffer more heartbreak when they discover, too late, that their loved one’s final wishes will not be honoured.