The Colston Four: Justifying Legitimate Violent Protest Within, and Without, the Law 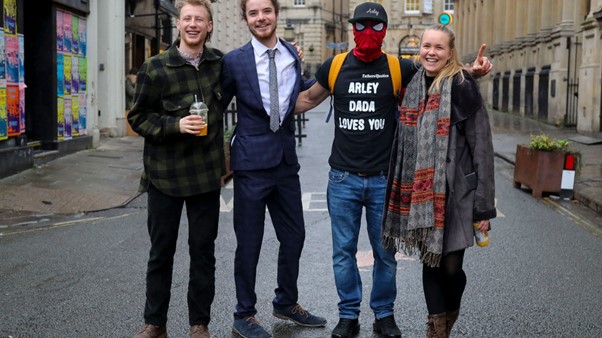 By James Greenwood-Reeves, University of Sussex

The public statue of Edward Colston, a slave trader during the 1600s, had been the subject of controversy for decades. Its uncritical commemoration of Colston, in the heart of modern, multicultural Bristol, struck many residents to be contrary to contemporary social values, and an ongoing insult to Black people within the community.

Attempts to remove the statue – or even to have a plaque added to the monument, to inform passers-by of Colston’s involvement in slavery and murder – were thwarted by the local council year after year. Normal political process to remedy the problem, frankly, had failed.

During the 7 June 2020 BLM protests in Bristol, the statue was toppled and plunged into Bristol Harbour. And on 5 January 2022, four defendants charged with criminal damage to the statue – who admitted to tearing the monument down – were found not guilty by a jury at Bristol Crown Court.

Although I will touch upon the defences raised during the trial, I do not intend to give an exhaustive breakdown of the key issues raised in this case. The Secret Barrister has posted an excellent piece which covers them in greater detail. Nor do I wish to explore the virtues of trial by jury, which David Allen Green has discussed, alongside an argument that this particular jury’s decision very much remained on the side of the rule of law.

Instead, I wish to invite a discussion on what underlies these analyses: that disposing of the statue was justified, with or without lawful excuse. There are times where violent protest is legitimate. And one feature, or function, of a jury trial is to bring this extra-legal analysis to our attention.

The main legal avenues for defence raised by defendants in the trial were, essentially, threefold. First, that (pursuant to, inter alia, section 3(1) of the Criminal Law Act 1967) the defendants were using reasonable force to prevent a crime. The statue, it was argued, was an offensive visual image under section 5 of the Public Order Act 1986; and was also an indecent display, under section 1 of the Indecent Displays (Control) Act 1981. Second, defendants argued that the damage was made with the consent of the owners – that is, the people of Bristol – and so was protected by section 5 of the Criminal Damage Act 1971. Third, the jury were asked to consider whether convictions for criminal damage would be a disproportionate interference with the defendants’ rights to protest – specifically Articles 10 and 11 of the ECHR, on freedom of expression and freedom of assembly. Even if convinced of the defendants’ technical guilt, the jury must consider whether criminal convictions were proportionate.

Whether we frame these claims as justifications, denials of liability, or excuses, the messy legal-theoretical distinction between these categorisations only fogs an underlying truth. Each defence depends upon the defendants’ actions being morally justified. It was right to remove an insulting, indecent symbol from public display. It was right to vindicate the will of the Bristolian people. It was right for protesters to vindicate their own rights to protest, against the perceived injustice that the statue had symbolised and perpetuated, even to the point of breaching criminal law.

We do not know, and cannot know, which (if any) of these defences were accepted by the jury. And the legal merits of these defences will doubtless be the subject of further contention, particularly if the Attorney General refers the case to the Court of Appeal. What seems particularly interesting, however, is that these legal arguments all seek to convince the jury of a deeper, moral position – with which I agree – that it was legitimate to act this way. It is ultimately such moral arguments, rather than the (debatable) legal arguments, which truly were the focus for the jury in this case. The legal defences were, in effect, mechanisms for bringing this broader, more important discussion, to bear.

We have seen several jury decisions recently where defendants have received seemingly “perverse acquittals.” In December 2021, six other Extinction Rebellion protesters were acquitted by a jury on charges of obstructing a DLR train at Canary Wharf – the first case in which the Supreme Court’s Ziegler ruling was applied, leaving the proportionality of criminal conviction against protesters as a question of fact for the jury. In April 2021, Extinction Rebellion protesters were acquitted of criminal damage to Shell’s London headquarters, even despite there being “no defence in law” left available to them by the trial judge’s direction.

As such, it is not really the legal legitimacy of the defendants’ actions which is left to the jury, in these cases. There may indeed be no lawful defence available. If we are being honest with ourselves, in all three cases, it seems that the law was broken. It is the moral legitimacy of that lawbreaking, however, which is key to the juries’ decisions.

My own research into the legitimacy of unlawful protest – including protest violence, particularly to property – is too longwinded to elaborate in detail here. The crux is this. Regardless the constraints of a traditional, pacifist conception of civil disobedience, even uncivil disobedience, and violent lawbreaking in protest, can be defensible. As Delmas argues in A Duty to Resist, far from endangering the rule of law, or our civic and social bonds, some forms of violent protest can in fact strengthen these values: by challenging failed democratic processes, heightening awareness and democratic dialogue around injustices, and actively removing barriers to justice within communities. The jury system is one way of introducing this important extra-legal, moral analysis to the determination of protest legitimacy.

We cannot always rely on jury verdicts to give “us” the finding that “we” want. A different jury could have found differently. That is, however, an inevitable part of moral argument. Inescapably, however we frame the legal arguments surrounding these protest cases – and even if a disgruntled government removes these defences by statute in future – jury trials serve as fora for these more interesting, and more important, moral debates.