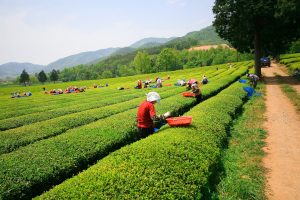 By Arwen Joyce, University of Leicester

The EPS’s most notable policy innovation is government oversight of the recruitment process. Hahamovitch noted that guestworkers in Europe ‘enjoyed more protection than they did elsewhere, in large part because states, not employers, controlled who could come and who could be made to leave.’ (Hahamovitch 2003, 85)

South Korea oversees the recruitment of low-wage temporary migrant workers through bilateral labour agreements with 15 source countries. (Park and Kim 2016, 81) Source countries are tasked with compiling a list of eligible workers from which employers in South Korea can choose. The bilateral agreements require the selection of qualified workers to be based on objective standards, such as the ability to pass a Korean language test and previous work experience or skills training. (Haolie and Roszkowska 2017, 3) By making temporary migrant worker recruitment the subject of bilateral agreements with source countries, the EPS attempts to eliminate the involvement of labour market intermediaries and their exploitative rent seeking, which is a major source of vulnerability for temporary migrant workers.

The policy has by and large been successful. In 2001, before the EPS was implemented, the average recruitment cost per temporary migrant worker in South Korea was US$3,509; by 2014 the cost per worker had dropped to US$941. (Park, 162-163) One NGO report calls this achievement ‘both uncommon and remarkable’ in the global migrant labour market.’(Haolie, 5)

Temporary migrant workers employed under the EPS can, with the permission of their employer, change jobs within the same sector up to three times during their stay without justification. In addition, following changes in legislation prompted by a 2011 Constitutional Court case, EPS workers can also seek permission from the government to change employers within the same sector an unlimited number of times under certain circumstances. Such circumstances include, the temporary or permanent shutdown of their workplace, revocation of their employer’s ability to sponsor employment permits, a violation of the terms and conditions of their employment by their employer, or unfair treatment by their employer. According to an migrant workers’ rights NGO in Singapore, the ability of temporary migrant workers in South Korea to change jobs at all ‘radically rebalances the dynamics of power between worker and employer’. (Haolie, 6)

Nevertheless, human rights groups in South Korea note that the labour market mobility of temporary migrant workers in the country remains subject to significant legal and practical limitations. Some employers demand payment in return for granting a worker permission to change jobs. Proving that the employer has acted unlawfully or treated the worker unfairly is often very difficult so including this requirement prevents the policy from fully achieving its aims. Furthermore, finding a new employer within three months may be made more difficult because of the availability of undocumented workers in the labour force. So, while EPS workers in South Korea generally enjoy greater labour market mobility than temporary migrant workers in other host countries in the region, significant legal and practical limitations to exercising that mobility remain.

South Korea’s suite of protective labour legislation applies to EPS workers. In addition, EPS workers have access to the country’s four major nationalised insurance systems and must purchase, along with their employers, migrant worker-specific insurance policies. However, when temporary migrant workers are the only workers in a given industry sector, there is limited pressure on the government to enforce and improve protections in those sectors.

Furthermore, there are vulnerable groups of documented migrant workers who are not covered by the full suite of protective labour laws in South Korea. Some of these are EPS workers in sectors like agriculture, livestock and fisheries that receive less protection under the Labor Standards Act, or who work for employers who are exempt from provisions of the Labor Standards Act by virtue of employing fewer than five workers. There are also workers on temporary work visas granted by the Ministry of Justice, like the C-4 seasonal foreign worker visa and foreign seafarers, who are not employed under the EPS or recruited pursuant to government to government bilateral labour agreements.

Recruitment fees are being partially replaced by costly Korean language training in source countries. Migrant workers’ de jure labour market mobility has increased but changing jobs is still risky and difficult for many. Finally, the complete absence of Korean workers in some industries tends to dampen protective regulation enforcement efforts in those sectors and gaps in protection exist. Thus, an examination of South Korea’s innovative approach to low-wage temporary labour migration highlights the pervasive, structural power imbalances that are a feature of every low-wage temporary migrant worker programme.

This research was informed by interviews the author conducted in July 2019 with experts in South Korea including academics, policy makers and NGOs. It was accepted to be presented in the Labour Law and Society Stream at the annual SLSA conference in 2020.