Inquiries, regulation and fire in the high rise 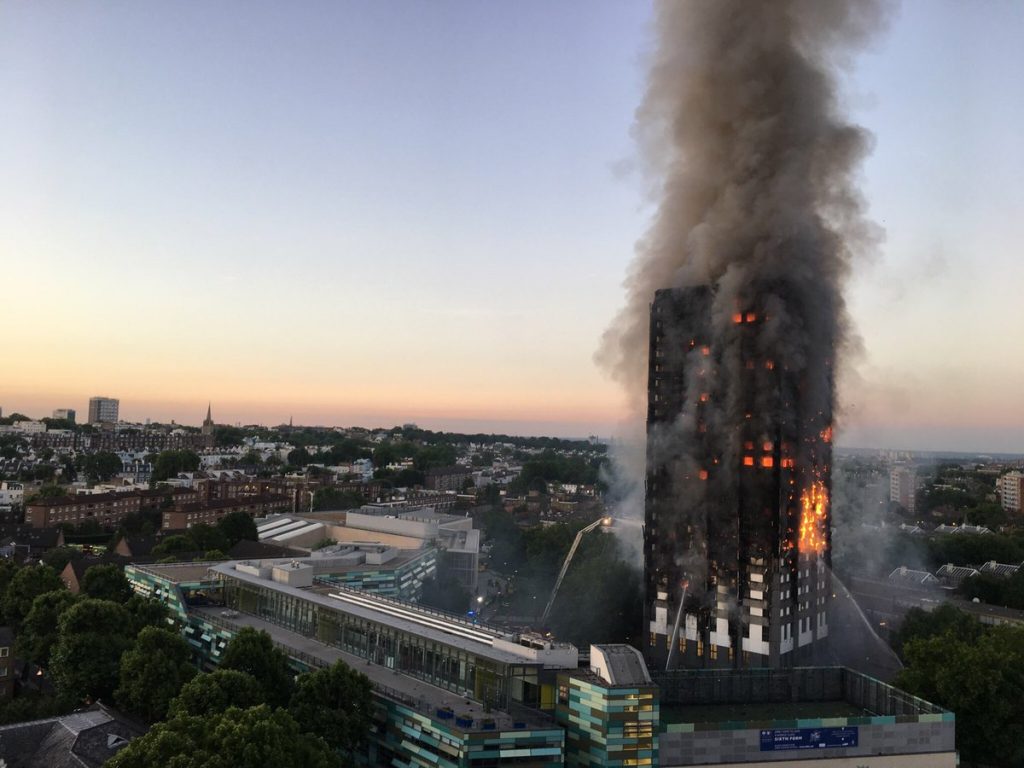 It is around 48 hours since the news of a fire at Grenfell Tower broke.  My reactions in that time mirror those of friends on social media and the wider public – from horror, to grief, to support for hard pressed public services, to anger over whether this was an accident waiting to happen, to questions over what this all says about the way some of the poorest residents of one of the world’s richest cities are treated, and back again each time to grief as the terrible stories of those who died emerge.  Many have been seriously injured, with 70 people currently in hospital, while there are 30 confirmed deaths and a grim acceptance that the final death toll is going to be far higher.

It is not yet known what caused the fire, or what happened after the fire took hold, but questions about the safety of the building and criticisms of the management of the building have already been raised by tenant activists and fire safety experts.  The main focus, given the reported speed at which the fire spread up the outside of the building, appears to be on the cladding around the building, recently refurbished using material which (reports suggest) was not fire resistant.  Other criticisms have been voiced around potentially inadequate boxing around pipework, the possible lack of an alarm, the availability of escape routes, and around the advice and information given to residents on what to do in the event of a fire – both at the time that the fire broke out and in advance.

As many have noted, many of the same debates following the Lakanal House fire in 2009, and the fire at Grenfell Tower is eerily reminiscent of that horrible afternoon in which 6 died; Dayana Francisquini, her daughter Thais and son Felipe; Helen Udoaka and her 20-day-old daughter Michelle, and Catherine Hickman.

The jury charged with hearing evidence on the deaths of these 6 returned damning narrative verdicts, finding that opportunities to do fire risk assessments were missed, and some refurbishment which had been done had not provided adequate resistance to fire.

For example, and amongst numerous failings identified, the jury found that internal modifications to Flat 79 made more than a minimal contribution to Ms Hickman’s death.  Ms Hickman was a private tenant in a flat which has been bought under the Right to Buy scheme, so her property was not directly managed by the local authority – it was owned by a private leaseholder, who then rented it to Ms Hickman.  The modifications had been undertaken by the leaseholder, and had been approved by Southwark as the freeholder, but with a recommendation that they be checked for fire safety by Southwark’s Building Design Services.  This check did not take place.

The Coroner, Frances Kirkham CBE, sent letters to those who might be able to prevent similar deaths in future, including Southwark, the Department for Communities and Local Government, and the London Fire Service.  In these letters, she made a series of recommendations to prevent future deaths, including a recommendation that sprinkler systems be installed and advice on Building Regulations be reviewed.  As has been widely reported, with little available funding, many of these recommendations have not been taken up.

However, less attention has been given to some of her other recommendations, including a   recommendation that flats should be inspected for modifications.  The flats bought from Southwark under RTB did not include a specific right of access to check for modifications in the lease, and Southwark responded to state that this meant they could not check for modifications.  In this response RTB leaseholders are framed as a barrier to the Council’s responsibility to manage the risk of fire in all their properties – and because their flats cannot be checked, they increase the risk for all flats and residents in the same block.  Southwark called for a national approach, while DCLG ignored this request, and reaffirmed guidance on fire inspections which emphasises the autonomy of RTB lessees.  The responses thus fail to engage with each other, and in their refusal to hear each other, they re-expose the long-standing conflict between a central government which has sought to promote RTB and lessen risks and obligations for leaseholders, and local government, who have sought to shift risk onto the shoulders of those who have exercised the right to buy.[1]

In this context, the response from the Leader of RB Kensington & Chelsea to questions about the responsibility of the Council in relation to the fire at Grenfell Tower is particularly telling.  When asked on the Today programme he stated that the Council would always ensure its own properties (my emphasis) are inspected by the fire service and that there are national regulations about fire safety.  He concluded that normally a fire in a flat is contained, but that hasn’t happened in this case and there needs to be a thorough investigation, including looking at the guidance.

Just as with Southwark, Kensington & Chelsea’s immediate response is to differentiate between residents based on tenure.

In such discussions, the often marginal ownership of RTB leaseholders, particularly in high rise flats, is entirely ignored,[2] while the even more vulnerable (legally, and potentially financially and physically) private tenants of RTB leaseholders entirely disappear.  Instead, ideological arguments about a property owning citizenry vie with frustration over the headaches caused by leaseholders keen to avoid spending on major works.[3]

The Prime Minister has announced a public inquiry (and see a critique of this decision by solicitor Sophie Khan).  As Phil Scraton’s groundbreaking work over many years has shown (and also see, for example, the work of Sherene Razack in Canada), such inquiries (and indeed inquests) have the capacity to represent failings as temporary and technical, to ignore the structures of power and inequality which create the conditions for such fatalities, and to focus on medical and technical discourses.  In so doing, they can decontextualize deaths, and fail to hear the voices of those – the bereaved, the survivors, the tenant activists – who experienced the horror of the fire at first hand.

One way this tendency might be partially reversed is if the inquiry chose to follow the advice of the Select Committee which reviewed the Inquiries Act.  It recommended that victims should be involved in setting terms of reference, and chairs of inquiries should meet victims and families as early as possible in the inquiry process.  It is also going to be essential for survivors and the bereaved to have legal aid for lawyers to assist them.  This provision should also extend to the tenant activists who raised concerns about the tower, to make sure they can play a full role in the inquiry (and it should go without saying that they should have interested person status to make sure they can set out their concerns in detail).

The concern is that, without such moves, the investigation will provide a space for the assertion of official discourses about safety and responsibility, disconnecting the fire from the underlying politics which are part of the explanation why so many died.  As with the Lakanal House fire – and suggested by the response of the Leader of Kensington & Chelsea – it means discussion about compartmentalisation, modification and refurbishment will end up mired in ideological and institutional conflict.  It might be that RTB played no part in the Grenfell Tower fire, but it is telling that the first instinct of the freeholder is to allude to the differential tenure of the residents – and the potential issues caused by differential tenure – and which recalls the ineffectual outcome of the Lakanal House inquests.  In so doing, the response lays down markers for the eventual inquiry – one in which it appears unlikely that social injustice and inequality will be central considerations.

*Ed Kirton-Darling is a Lecturer in Law at Kent Law School, University of Kent. His research interests include the law relating to inquests and inquiries, and housing/homelessness law. He can be contacted at ek276@kent.ac.uk

N.B. This blog is cross-posted from the Kent Law School Countercurrents blog.

[3] See for example, discussion in Jones C. & Murie. A. The Right to Buy: Analysis & Evaluation of a Housing Policy.  2006.  Oxford: Blackwell Publishing.