How can legal scholars study cultures far from our own?: What I’m reading

by Tamara Hervey, School of Law, University of Sheffield. An extended version is at ablendedlifeblog 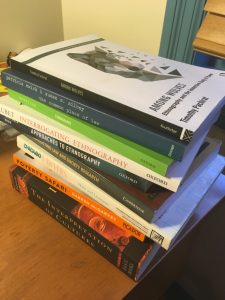 How do you study a culture far from your own? I don’t mean geographically far. The cultures I’m trying to understand are close to home: in the north of England, Scotland and Northern Ireland. What I’m talking of is social distance, the distance that is labelled, fuzzily, social class.

The answer that it is impossible carries a valuable warning, about the ethics of claiming to understand any ‘other’, that we must be circumspect with our claims, and explicit about our biases and assumptions. In ethnography, ‘the ethnographer – a living, breathing, feeling individual – is the primary instrument of data collection and interpretation’ (Stuart 2018: 211), and knowledge production draws from the relational (Harper 2018: 113), so power and privilege matter.

But I want to insist– this ethical obligation of reflexivity or ‘ethnographic comportment’ (Harrison 2018: 28-33) aside – that we can and should. One of the things Mark Flear, Matt Wood, Ivanka Antova and I are studying in our ESRC Health Governance after Brexit project is communities in the north of England and Northern Ireland, and how people there feel about Brexit, the NHS and what a legitimate post-Brexit health law and policy would look like.

One approach is to read the words of the ‘foreigner’. Biting and visceral memoires such as writer and rap artist McGarvey’s Poverty Safari (2017) deal explicitly with politics, and (lack of) communications across the class divide.  McGarvey thoughtfully explores how the jargon of government reinforces class-driven assumptions. These assumptions make communication, however well-meaning, extraordinarily difficult.

McGarvey concentrates on interactions between material deprivation, (mental) ill-health, addictive behaviour, and criminality. A running thread concerns democratic legitimacy – not being heard, and the political apathy that ensues. Reflecting directly on the EU referendum vote, McGarvey suggests it can be understood as what happens ‘when people who are rarely heard decide to grab the microphone and start telling everybody how it is’ (2017: 119).  For him, classism is crucial, not migration, or racism, and Brexit is a mere side-show detracting from nuanced discussions about the complexities of poverty (2017: 142).

He calls for a ‘new leftism’, which reclaims ‘the idea of personal responsibility from a rampant and socially misguided right wing that has come to monopolise it’ (2017: 112). This resonates with some data from our street conversations about responsibilities and the NHS, suggesting that some people very much agree that individuals should take more personal responsibility for their health, rather than thinking of health as a collective responsibility, institutionalised through the NHS.

A different route to understanding ‘the foreign’ is ethnography. We are using ‘hit and run’ ethnography (Rhodes, 2011, Boswell et al 2019) in streets and shopping centres in towns in the north of England and Northern Ireland. Along with revisiting legal ethnographies I have read in the past, I have been dipping in to some recent primers on ethnography.

Harrison combines practical advice and theoretical perspectives. The book provides a short overview of ethnography; its historical roots in anthropology and sociology; the concerns and orientations that animate its contemporary practice; and its paradigm orientations. This discussion animated a line of thought about the type of knowledge we hope to produce in our project: where do we sit between positivism (which underpins much legal and political science scholarship); interpretivism; and critical paradigms? I noted the idea of ethnography as ‘bricolage’ (2019: 123, drawing on Lévi-Strauss 1966): ‘cobbling various data and utilizing different modes of representation in such a way as they hang together through a sense of narrative coherence – and occasionally through intentional, effective disjuncture’ (2018: 123). I don’t know of any law publisher which accepts that kind of approach to data and its analysis: this is going to be a challenge.

Harrison did not discuss ethnography as a team effort: the underlying assumption seemed to be of lone scholarship, which is very far from what we are trying to do.

Jerolmack and Kahn is a reflection on different approaches to ethnography: micro/meso or organizational/macro; people & places / processes & mechanisms; dispositions / situations. Reading the contributions to the book, which are descriptions of existing ethnographies in extremely varied contexts, leads me to provisionally place our project in the macro; and in people & places; and the situational rather than the dispositional.

That book ends with a discussion of abductive reflexivity: a process where ethnographers embrace their otherness, and use both inductive and deductive models of inference. I think we can deploy that kind of approach, although our ‘hit and run’ limitations mean that testing and re-testing initial hypotheses will have to come through reflection on the data we have, rather than returning to the field to gather more data.

Lubet’s book is – at heart – a plea for accuracy in social sciences. Lubet explains his infuriation with Goffman’s (2014) acclaimed book, which led him to forensically check the veracity of the truth-claims made in a range of ethnographic work, from a legal viewpoint. Lubet’s test throughout is ‘would a judge in a criminal or civil trial accept this claim, without corroboration?’. Essentially, this is a detailed and compelling application of Duneir’s (2011) imaginary ‘ethnographic trial’. And it’s a strong warning of how legal audiences may read our project outputs.

Nicolaidis’ book is enormously impressive. It’s a reading of the different possible meanings of Brexit through (European) mythology, interspersed with evocative works of art, symbolising the different accounts of post-EU referendum/post Brexit realities. I have heard (and told) so many stories about Brexit and what it means and will mean, and to whom, that it becomes dizzying. This book puts them into a highly nuanced yet comprehensible order and structure: Brexit as British exceptionalism; Brexit as an indictment of the EU and an exposition of its ‘dark side’; Brexit as the salvation of the EU.

For the project, though, what is most illuminating is Nicolaidis’ claim for the epistemology of storytelling and metaphorical expression. Thinking through myths, argues Nicolaidis, allows us a critical distance from the stories that we tell ourselves ‘by placing question marks around our collective self-righteousness’ (2019: 182). I permit myself a wry smile when reading those words, reminded of McGarvey’s account of the anguished Guardian readers’ responses to the ‘crisis’ of the referendum vote. Nicolaidis also suggests that mythical stories can play a role in democratic processes.

Pachirat’s Among Wolves is a story recounted as a play, about the meanings of ethnography, or of social science, or perhaps even of research and knowledge creation and circulation more generally.

With enviable chutzpah, Pachirat agreed to write the book, on the condition that he would do so in the form of play in which representatives of key positions in ethnography interact with each other. The essence of the play is a trial of Alice Goffman, involving 9 other well-known ethnographers. It is a tremendously effective didactic device, which goes through – with seamless transitions – all of the key points one would seek to get across in a conceptual course on ethnography, or an ethnography primer, along with a discussion on ethnographic pedagogy.

But the play is also deliberately equivocal about its understanding of power and knowledge creation about ‘others’.

One of the meanings of the story Pachirat tells is that ethnography is a practice under threat: the trial is a powerful device to get across that meaning. I was struck by the thought that every academic method/ology or discipline that I know of regards itself as under threat: even the (to me) most powerful natural sciences. I guess the whole Higher Education sector feels under threat, perhaps justifiably.

The book responds to the question posed at the outset (how can one (legitimately purport to) understand the ‘other’?) by observing that the answers to those questions are as messy as the realities that shape them (2019: 155). But the idea that ‘the rich cannot conduct research on or with the poor (or vice versa) should be rejected, so long as differences of power are neither denied nor erased’. (2019: 155).  Ethnography is more visibly problematic than other types of knowledge creation:

‘JIM: … Because ethnography takes as its stated aim the understanding of the other from the perspective of the other, it creates a much more tangible and palpable tension than other kinds of projects of knowledge creation that do not make those kinds of claims’ (2019: 45)

What do we gain by substituting the word ‘tension’ for the metaphor of wolves? Wolves evoke a sense of danger. We evoke an allusion to old folk tales (Peter and the Wolf; Little Red Riding Hood; The Three Little Pigs) where the wolves are the dangerous ‘other’ ‘in the forest’, outside the safety of ‘home’, and might destroy our homes, swallow our grandmothers, or us.  We evoke an allusion to the concept of werewolves: the idea that there are humans among us, unknown to us, who are sometimes in wolf form and are out of control. Ethnographers are in danger, and they may not even know where the danger comes from.

But we also evoke an allusion to excitement, to the frisson of the wild, the untameable. Ethnographers, we are being to encouraged to learn, live among the undomesticated, and as such, we are being encouraged to see them as heroic figures in the academy.

And, finally, how does the story told in Among Wolves represent law and legality, and indeed my own discipline of legal scholarship? It is here that the story most disappoints: what it tells me is something I’ve already experienced, which is that many from across social sciences deploy a distinctly flat, unproblematized and uni-dimensional notion of law and legality. Not only is law/socio-legal studies missing from the list of disciplines in which ethnography is practised (2019: 62) and the hermeneutics of law are absent from a possible method which could be mixed with ethnography (2019: 35-36); but law itself is reduced to the binary: guilty/not guilty, as opposed to the heroic problematized discursive notions associated with ethnography. This – among other things – is what we seek to redress in our project.