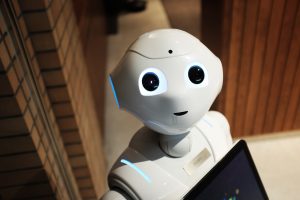 By Jo Smith, features writer for the Immigration Advice Service; an organisation of immigration lawyers in the UK, Ireland and the US.

Whenever the future is depicted in sci-fi films or the media, technology tends to feature prominently as an aide to daily life. From robots that perform routine and mundane tasks to advanced intelligent technology that can operate on a more autonomous level, technology has permeated our everyday lives and our vision for how the future ought to look.

As the NHS and care workforce battle the coronavirus crisis, there have been a number of moral quandaries over the practicalities of automating the healthcare system and hedging in so-called ‘care robots’. Yet the potential benefits are myriad: a workforce that is not susceptible to contagions; the ability to fill positions which have been left vacant by staff who are ill or having to isolate to prevent the spread of infection; and the potential for a 24-hour workforce that doesn’t need significant time off during times of extraordinary pressure on the health service.

Already, the integration of robots into healthcare services has been hugely successful in both physical and mental terms. Toyota have released a range of robots designed to assist patients who need help walking and regaining their balance while others help healthcare assistants by taking the weight of patients that need help moving from a bed to a chair, for example. Paro, the furry robot seal, has been used to promote mental health, particularly in those with dementia and for those with Autistic Spectrum Disorders. The efficacy of support animals has long been recognised, but the introduction of emotional support robots has enabled more widespread use without any of the concerns about infection risk, hygiene concerns and training that can be an issue with real animals.

The potential for replacing humans with robots has been an area of technological research which has fascinated tech giants for decades. As computing power and capacity has increased, many jobs have been supported and, in some cases, surpassed by technological solutions which can offer increased accuracy and productivity for lower overall costs. The pace of research into these solutions has increased over recent years due to the impact of Brexit on the availability of migrant care workers.

However, while it seems sensible to plan for a future in which many of the more routine or physically demanding duties can be performed by artificial intelligence, the UK government has laid out plans which explore the potential for replacing some ‘key workers’ altogether.

The Government’s immigration proposals to block entry for workers earning less than £25,600 per year from January 2021 relies strongly on alternatives to human workers, especially in the care sector where wages are often as low as £16,000 according to the National Association of Care and Support Workers. The other criteria for securing a Work Visa includes having a PhD or fulfilling a job on the UK Shortage Occupation List, neither of which apply to care workers despite vacancies of more than 100,000 positions in the sector which could rise to 460,000 under the plans. These concerns were addressed for other areas of healthcare by the introduction of the NHS visa, but no such measures have been put in place to protect caring roles.

In October 2019, the Government responded by pledging £34 million to develop its bizarre vision of care robots instead of amending the immigration rules. In February, the Home Office reiterated that employers will need to “adapt” from reliance on EU labour to such automated systems in a move which has since been described as “ridiculous” by Noel Sharkey, a professor of Artificial Intelligence and Robotics at Sheffield University and former judge of Robot Wars.

However, integrating automation in the healthcare sector could be an effective and hugely positive step for medical professionals and those who need care, providing AI supports and relieves the physical burden of care, rather than replace flesh-and-blood staff. Automation has the potential to revolutionise the sector if it is executed correctly, but the vision to replace human contact with ‘care bots’ fails to take into account the necessary factor of human, tactile touch in care work. Further still, robots are unable to express empathy, ascertain patient’s mental state or accurately assess someone’s changing care needs. Some AI algorithms have even become fraught with human prejudices which mark them ill-suited to the complex and diverse stage of care work.

Yet coronavirus might just propel the case for AI in healthcare. As staff are frequently pushed to their physical and mental limits, often with a lack of personal protective equipment, support delivered by automation could be hugely effective as is the case of a new ward that was built in a Chinese hospital where COVID-19 patients were treated exclusively by humanoid robots. Here, the robots were utilised to deliver food and medication to patients, take note of their vital signs, clean corridors and even dance for entertainment, all while controlled remotely by staff.

Elsewhere, robots that have been trialled in caring environments have been welcomed by staff and residents alike, but for the nuanced care that is also needed, automation is still an insufficient option when it comes to effectively replacing the functions of human staff. While there is an ongoing staffing crisis in care and Brexit limitations also looming, automation may not be the immigration solution the government is hoping for.

There is a desperate need to strike a balance between using technology to relieve the pressure on overworked sectors and attempting to cut costs and care levels by replacing humans with robots. Experts estimate that automation could save the NHS more than £12 billion a year, if it uses virtual workers to tackle data entry tasks. If the scope is broadened to use robots to assist in areas where they excel such as the early diagnosis of Alzheimer’s Disease and some types of cancer, then the success that we have seen using automation to reduce the impact of the Covid-19 could be replicated in other areas of healthcare.

The unprecedented spread of the Covid-19 has highlighted the need for increased research and understanding of the potential for automation, but knee-jerk implementation could result in damaging losses of personnel and skills. The future will feature robots and other forms of automation, but they should not be viewed as an alternative to a trained and experienced workforce, rather as a tool to be used by healthcare professionals in order to deliver excellent care to their patients.