A Reckless and Irresponsible Court

The much anticipated (and leaked) decision of the US Supreme Court in Dobbs v Jackson Women’s Health Organization, overturning Roe v Wade, has already received much commentary, and will continue to do so. This comment on the case is not about the rights and wrongs of abortion. It is about the proper role of the highest court, such as the US Supreme Court, in a constitutional democracy. My concern is about the responsibility of judges in such a court, and the place of that court in the society to which it must address its decisions.

For any court, a key issue should be where it can find popular legitimacy or, more fundamentally, whether legitimacy is an issue at all. The Supreme Court watches the election returns, said Finley Dunne’s fictional Mr. Dooley. But perhaps the current Court is not interested in public opinion. On abortion, five of its Justices are entirely sure that Roe was wrongly decided in 1973, whatever disagreements about this exist in American society. In May, after the Dobbs ruling was leaked, an opinion poll found that 54% of Americans disapproved of the job the Court was doing.

Sonia Sotomayor, one of the three liberal Justices who dissented in Dobbs, asked: ‘Will this institution survive the stench… in the public perception that the Constitution and its reading are just political acts?’ But the Court’s decisions are indeed often popularly seen as political. Does this matter? Do people care about legitimacy of courts, or do they see them solely as part of a complex state machinery that ultimately is democratically supported? Although judges are usually appointed not elected, enough of government may be founded on the idea of democratic election to allow courts to ride on the back of the democratic system. 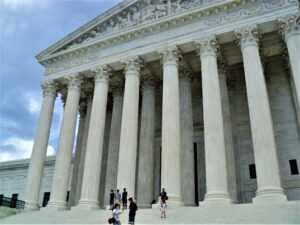 Perhaps, then, courts, including a supreme court, do not need independent legitimacy. There may be fierce public protests – as occurred more than half a century ago when a more socially aware US Supreme Court outlawed racial segregation in US public schools. Bumper stickers then apparently demanded impeachment of the then Chief Justice. But popular protests got nowhere, as they will with the current Court. The security for a court lies in its function in society, not in its precise constitutional mandate, or its relation to public opinion. When the US Court first asserted its general power of constitutional review of legislation in Marbury v Madison this could eventually be accepted as a contribution to the separation of powers.

Such separation is a political idea but its correlate – as a social idea – is that of a balance of social forces necessary to build solidarity in a society, keeping different parts of the population integrated through a structure of representative institutions. Unelected judges cannot securely claim democratic legitimacy. Their security is in their social function of surveying a range of socio-economic actions and relations brought before them, and finding balances, compromises, and restatements of principle, to dispose of disputes in ways that can avoid unlimited social conflict, or at least are consciously aimed at achieving this.

It is in this perspective that the US Supreme Court’s uncompromising overturning of Roe v Wade must be seen as an abysmal constitutional failure, an irresponsibly partisan pronouncement, and a reckless abuse of judicial power. It contributes nothing to solidarity. It shows the Court, not as an institution with a necessary function in American society, but as a set of individuals each with a constitutionally given power to impose his or her personal will and belief on American society, irrespective of their colleagues’ views, of popular opinion, and of political and social consequences.

Of course, there are now many calls to reform the Court. Perhaps to pack it with more Justices to make it less politically unbalanced; to appoint Justices with fixed tenure; to allow Presidents a maximum number of nominations to the Court; or even to curtail its constitutional powers of legislative review. The key problem, though, is that almost everyone seems to have lost sight of the responsibility of a supreme constitutional court to build solidarity, to balance not merely political powers but also socio-economic forces that, unchecked, can threaten to tear a society apart. How could it be possible to re-affirm that responsibility – which might be talked about in terms of public responsibility or even ‘the common good’?

The answer does not lie in constitutional reform but in rebuilding a culture of collective social responsibility. There are no easy ways to do this. The responsibility of any Chief Justice is, in part, to act in a way that builds respect for the Court. Chief Justice John Roberts, who sometimes now cautiously distances himself from his fellow conservative Justices, shows awareness of this, and a concern (like Sotomayor’s) for what is happening to his Court. But his colleagues who engineered the destruction of Roe v Wade seem not to do so.

Those of us who have long admired the central institutions of the American polity can only hope that the present Court can recover an idea of its social as well as constitutional function. Given the long tenure of Justices and the entrenched partisanship of judicial appointments this will be slow. It will need things that are presently absent: political vision, civic self-education, a renewed respect for precedents on which not only lawyers but lay citizens have relied, and a recovered sense of political conditions for social solidarity.

About the Author: Roger Cotterrell