The Routledge Handbook of Law and Society: A new resource for teaching in these difficult times 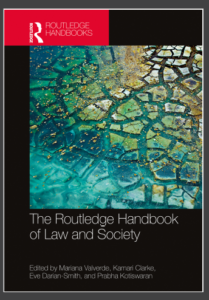 By Mariana Valverde, University of Toronto

The Routledge Handbook of Law and Society, edited by Mariana Valverde, Kamari Clarke, Eve Darian-Smith, and Prabha Kotiswaran, is due to be published in March 2021 by Routledge UK. An innovative collection emphasising global South, anti-racist, feminist, Indigenous and post-colonial perspectives, it contains 60 short chapters written by an interesting, very ‘global’ mix of established and junior scholars. Most of the entries are around 2,000 words, kept both short and jargon-free, with a view to allowing instructors in social sciences, humanities and law courses to generate small sets of diverse but related readings.

Part I contains longer entries (between 4,000-5,000 words) devoted to explaining, in very accessible language, contemporary perspectives in use in socio-legal research –not ‘theories’ as such, but rather approaches. These include Actor Network Theory, Critical Legal Studies, Critical Race Theory, Indigenous legal thought, feminism, postcolonial studies, queer theory, and transnational law. But the topics are not as separate as is usually the case. For example, the Critical Legal Studies entry from Vasuki Nesiah is strongly anti-racist and anti-imperialist; the ‘feminism’ entry from Donatella Alessandrini is written from a global political economy perspective; the queer theory entry from Sarah Lamble is written from an anti-racist perspective, and the ‘Actor Network Theory’ was authored by two Latin American scholars, Leticia Barrera and Sergio Latorre, whose joint contribution was translated from Spanish for this volume.

Many of the 40 shorter, topic-based entries in Part II could also be assigned to students to demonstrate how methods or approaches work. For example, an entry on ‘legal consciousness’, by Lynette Chua and David Engel, is more methodological than substantive, while the entry on ‘liberalism’ by Mariana Valverde is equally suited for either a theoretical or substantive use. Similarly, the entries on agriculture, climate, and on food and water issues have the cumulative effect of challenging conventional notions of what count as central socio-legal topics.

Eschewing conventional legal categories, the volume does not have entries on ‘family’, ‘property’, ‘contract’, and so on. Instead, legal processes are illuminated by adopting a more timely perspective that consistently features the role of movements in furthering social as well as legal justice. For example, the entry on ‘Ownership of intangibles’ by S. Ali Malik and Rosemary J. Coombe is not a typical intellectual property summary: it uses as its main empirical example the issue of corporate appropriation of Indigenous knowledges of plants.

Similar innovation is visible, for example, in the entry on ‘corporations’, by South Asian historian Bhavani Raman, which focuses more on the European imperial corporations of the early modern period than on business law. And the entry on ‘Islam and the state’ by Anver Emon is also highly innovative: instead of ‘explaining’ Islamic law to common-law students, it shows, with evidence from Saudi Arabia and from the US and Canada, how Islam and ‘Islamic law’ are mobilized for opposing political purposes by different states. Another example is the entry on ‘migration’, written by Singapore socio-legal scholar Brenda Yeoh: it puts the Indian Ocean and the Pacific at the centre rather than treating them as footnotes to Atlantic-centred narratives.

Instructors may want to look through the table of contents (and the very diverse and timely list of authors) with the aim of choosing a few entries for a particular class/topic. As is the case with other handbooks, it is not necessary for students to purchase the whole book as a course text; chapters are independent. For example, for a class on the environment as a legal issue, the timely entry on climate justice by Usha Natarajan at the American University in Cairo could be grouped with the excellent entries on ‘agriculture’ and ‘food sovereignty’, as well as with the two entries on water conflicts – one on international conflicts, and one focusing on an Indigenous women struggling, in India, against the Coca Cola company. Similarly, for a class on political economy, one might group together ‘capital and capitalism’, ‘finance and debt’, ‘infrastructure’, ‘supply chains and logistics’, and perhaps ‘domestic labour’ by Adele Blackett, a key author of the ILO convention on domestic workers.

The collection is dedicated to the influential US socio-legal scholar Sally Merry, whose entry on “indicators” is one of the last pieces she authored before her untimely death in 2020.

Finally, due to the accident of the English alphabet, the book’s concluding chapter  ‘white supremacy’ is perhaps an indication of the timeliness and relevance of this volume to today’s students.

SLSA members are eligible for an exclusive 20% discount on this forthcoming publication when it is purchased directly through the Routledge website – simply use the discount code FLR40 at the checkout.