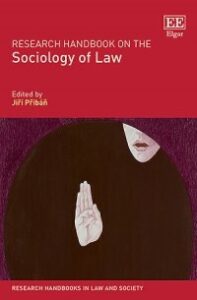 At this year’s SLSA conference, the Sociology of Law stream will be reflecting on the Research Handbook On the Sociology of Law edited by Jiří Přibáň. Both book and stream are organised in a way that map the sociology of law as theoretically and conceptually rich and complex social science. They focus on relationship between the sociology of law and legal theory, jurisprudence, history, anthropology, ethnography, economy, science and societal regulation. They address sociological conceptualisations of the rule of law, living law and legal culture, legal system, legal consciousness, legal subjectivity, legal temporality, legal images and professions. Finally, they discuss the sociology of specific legal disciplines and different areas of positive law, such as constitutional law, contract law, property law, family law, law and religion, health law, criminal law, housing law, labour law, digital law and artificial intelligence, and transitional justice.

Launching the Sociology of Law stream on Tuesday 30th March 2021, Roger Cotterrell revisits the concept of sociological jurisprudence and transforms its traditions into a new theoretical enterprise, reformulating the position of sociology of law and its relationship to both legal and social sciences, and Marc Hertogh explores the legacy of Ehrlich’s concept of living law as ‘the other hemisphere of the legal world’. Following this, Joxerramon Bengoetxea explores close links between legal theory and sociology of law and different uses of sociological theories and knowledge by legal theorists.

In later sessions,  Richard Nobles and David Schiff use the social systems theoretical perspective to examine and reformulate the concept of legal system. Fernanda Pirie describes commonalities and similarities between sociology of law and legal anthropology, and we will explore Bettina Lange’s analysis of regulation studies and the role of sociology of law in this field of interdisciplinary research. This will set the tone for further interdisciplinary explorations, such as Sarah E. Hamill, who offers an outline of sociological conceptualisations of contract and property law, and deals with current methodological problems as much as future challenges for this particular field of sociology of law. Antonia Layard examines the concept of property in its socio-legal context and combines it with the perspective of post-colonial studies, and Dave Cowan and Sally Wheeler look at the history and sociology of housing law and interdisciplinarity of this area of research.

The Sociology of Law stream also provides an opportunity to deal with the most general and acute issues of legal regulation, namely artificial intelligence and transitional justice. These two areas of research may look very different, yet they illuminate the global dimension of contemporary law as much as the need to respond to its challenges, injustices and contingencies by innovative forms of sociological and interdisciplinary research. Here, Håkan Hyden presents a sophisticated analysis of artificial intelligence and digitalisation, and possible legal responses to these societal developments. Similarly, Stephan Parmentier and Camilo Eduardo Umaña Hernández address the ‘eternal’ problem of political crimes and injustices, yet their response also searches for innovative sociological explanations and clarifications in the context of our globalised social and political experiences.

Contributions to the stream will provide an insight into the rich scholarship which has been drawn together in this handbook. Delegates and readers alike will note that the handbook represents a collective of scholars balanced across gender, age and academic position, bringing together young talents as well as leading scholars in sociology of law. Beyond the speakers that will be present at the conference in a few weeks,  there is an even broader range of scholarship within the handbook itself that delegates may wish to consider.

In the first part of the handbook, close links between disciplines and approaches are considered. For example, Chloë Kennedy analyses the link between the sociology of law and legal history and their respective methodologies. Ethnographic studies of law have a long tradition and Anne Griffiths rethinks it in the context of sociological, even philosophical, conceptualisations of power, discourse and knowledge. While Iagê Miola and Sol Picciotto deal with power and inequalities constituted by the economic system, Emilie Cloatre and Martyn Pickersgill explore different forms of communication and interaction between law and science.

In the second part, Jiří Přibáň taps into the rule of law traditionally dominated by legal and political theorists and philosophers to highlight sociological origins and contexts of legality and legitimacy. Here, David Nelken revisits the concept of legal culture and its importance for sociological research of law. In another chapter, Patricia Ewick and Susan Silbey examine the relationship between legal consciousness and hegemony, and thus link general issues outlined in the first part of the Handbook to the more specific problems of power and hegemony evolving in the system of positive law. Pierre Guibentif then formulates a powerful sociological theory of legal subjectivity, and Lyana Francott engages with the systemic conceptualisations of time in law and society. Drawing on the semantics of law, Linda Mulcahy’s chapter is closely connected to Guibentiff and Francott’s analysis of the legal constitution of subjectivity and temporality because it offers a sociological analysis of the constitution of different legal images. The second part of the Handbook is then completed by another internal construct of the legal system, namely legal professions examined by Lisa Webley.

The final part of the handbook then engages with sociological perspectives applicable to the specific legal disciplines and different areas of positive law. While Paul Blokker offers a detailed sociological assessment between the systems of law and politics, including the differences between legal and political science, Chris Thornhill presents a rapidly expanding field of sociology of transnational constitutions and global constitutionalism. This part of the handbook includes three chapters that focus on the closely connected institutions of family and religion and the integrity of human life. While Mavis Maclean reflects on the specific evolution of international collaborative networks of sociologists of family law, Russell Sandberg examines the historical and intellectual development of law and religion studies and its sociological dimension. Atina Krajewska’s contribution is closely related to these chapters because it explores theoretical and ethical issues of another extremely dynamic and fast developing field, namely health law and its globalization. Chapters in this final part also engage with problems of social justice and injustices in the realm of criminal law and labour law. Sharyn Roach Anleu revisits the classic concepts of deviance and crime and comments on its theoretical, sociological and social injustice dimensions, including gender discrimination and the process of deviantisation.  Ralf Rogowski then contributes by sociologically assessing a branch of law historically evolving by societal and political regulation of contractual freedom, namely labour law, its institutional developments and globalisation.

The Sociology of Law stream will take place across the three days of the SLSA 2021 conference, hosted by Cardiff University. Registration is available on the SLSA 2021 website.

The Research Handbook On the Sociology of Law was edited by Jiří Přibáň and published by Edward Elgar in December 2020.