Securitising Childhood? Targeting Children in the Name of Counter-Terrorism is a Dangerous Pattern in Europe 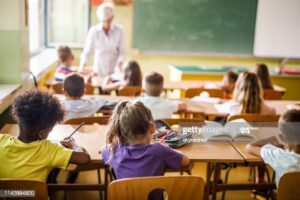 As part of the country’s wider crackdown on extremism in the wake of recent terrorist attacks, last week the French government announced new counter-radicalisation measures including a Bill that restricts the home-schooling of children and that gives children a specific ID number to ensure that they are attending school. Parents who do not comply with these measures face a fine and a potential six-month prison sentence. According to the French Interior Minister Gerald Darmanin, these measures are necessary if France is to ever  ‘save [its] children from the clutches of the Islamists.’

The Securitisation of (Muslim) Childhood in Europe: A Wider Trend

Although this direct targeting of children as part of wider counter-terrorism policy might seem shocking, the securitisation of childhood in Europe is certainly not. Studies by child rights organisations and the UN Interregional Crime and Justice Research Institute show that counter-terrorism laws and policies in various European countries have increasingly focused on children, interfering with and even violating their rights. These measures range from “softer” initiatives that facilitate the monitoring and surveillance of children in educational settings to detect signs of radicalisation to the specific using of children as spies . There has also been a rise in the number of children convicted of terrorism offences in Europe, leading to an increasing overlap between the youth justice system and counter-terrorism.

This securitisation of children is perhaps most clearly present in the UK. The home-schooling of children in the UK has already been targeted as part of wider initiatives to tackle radicalisation. The UK’s Prevent Strategy identifies extremism and radicalisation as child-protection risks. It legally obligates local authorities, schools and even nurseries with the duty to prevent terrorism, demanding that they incorporate the countering and prevention of radicalisation into their wider statutory child-protection and safeguarding duties. School teachers are asked to watch out for certain suspicious engagement factors such as ‘being at a transitional time of life,’ having ‘a desire for political or moral change’ and feeling ‘a need for identity, meaning and belonging’ which might indicate that a child is vulnerable to radicalisation.

In fact, counter-terrorism has even reached the family courts of England and Wales.  Over the last years, family judges have made decisions regarding the welfare of children deemed to be at risk of, or from, childhood radicalisation and parental extremism.  These cases, which are officially known as the radicalisation cases, have appeared in the family courts for a myriad of reasons including to prevent children and/or parents from travelling to ISIS-held territories in the Middle East, to protect children from the extremist views of their terrorist and/or extremist parents and to decide on the welfare of children returning to the UK from former ISIS strongholds. They are also varied in terms of outcome. In some cases, the family courts have made children wards of court, in other cases they have electronically tagged parents and/or granted care orders that permit social services to closely supervise the families in question. In a handful of radicalisation cases the courts have even sanctioned the permanent removal of children from their homes.  Together, the radicalisation cases have given the counter-terrorist state unprecedented access to the family home, allowing it to regulate the parent-child relationship and the home and family life of children in the name of protecting them from terrorism and extremism.

Clearly, then, the French government’s proposed targeting of children and regulation of their education in the name of national security is part of a broader Europe-wide trend. Yet it is worth emphasising that the securitisation of childhood in Europe is racialised, for it is Muslim children in particular who have borne the brunt of recent counter-terrorism measures. The majority of children referred by schools and other agencies to counter-radicalisation programmes are Muslim. Childhood experiences, such as feelings of alienation from wider society, conflicted identities and involvement in political causes, are pathologised and treated as suspicious indicators of propensity towards radicalisation when the children in question are Muslim. Muslim childhood has become a new frontier in Europe’s ever-expanding fight against terrorism.

Children’s Rights: A Missing Piece of the Puzzle?

The recent focus on children with the counter-terrorism initiatives of various European nations is understandable. ISIS has directly targeted children for propaganda and recruitment purposes. Statistics show that around 20% of Europeans who left their countries to join ISIS were women and children and a significant proportion of those returning to Europe from former ISIS strongholds are children. Obviously, states have a legal obligation under international human rights law to protect children from the kinds of harms that might result from involvement in terrorist-related activity.

Nonetheless, this reality does not make the increasing securitisation of childhood in Europe any less concerning from a children’s rights perspective. Counter-terrorism measures that approach children solely from a narrow welfarist lens that emphasises their vulnerability and need for protection above all else forget that children also have agency and are entitled to general as well as child-specific rights that must be respected. Both the proposed French measures and the wider targeting of (Muslim) children within the national security laws and policies of various European countries interfere with and potentially violate a number of important children’s rights including the right to education, the right to a private and family life, freedom of religion and the right to equality and non-discrimination. Under the UN Convention on the Rights of the Child, children also have a distinctive right ‘to be heard in any judicial and administrative proceedings affecting’ them.