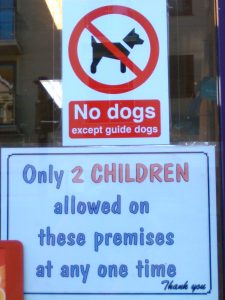 Amongst news of refugee deaths in the Mediterranean, stalled Brexit talks and North Korean missiles, the summer of 2017 has also brought us a piece of news entitled ‘Coffee shop owner defends no children policy’, courtesy of the BBC. The story behind it was that of a business man in Brixham, Devon, who created an ocean-liner themed coffee lounge. Afraid of children damaging the antiques and collectables decorating the premises of the space in question, and wishing to ensure that his clients could enjoy a ‘quiet atmosphere’ without ‘distraction’, the owner of this business decided to prohibit entry to children under the age of 12.

Although this may have shocked many people, those familiar with similar practices across the UK will not have found this case particularly surprising. Indeed, there have been reports of unpleasant experiences by people visiting tea shops with their children, and even of under-16s being refused entrance into certain chains unless accompanied by adults. The sign industry seems to have intelligently tapped into this market, by offering a range of signs that can suit the preference of any business manager, from signs with just words to signs with children pictured in them – all signs that could easily be mistaken for official traffic signage. Not wishing to have children in certain commercial premises can also translate into more subtle signs, such as aloofness of staff members, the absence of child menus or lack of high chairs in restaurants.

This is not a debate raised only in the UK, of course. Similar issues have been debated in other countries, in particular the US, but also elsewhere in Europe. Going out with children to restaurants seems to be a particularly difficult area of debate, with many people in social media asserting that high-end restaurants should undoubtedly adopt no-child policies. Some deal with it with humour and try to make people understand that parents may actually wish to go out with their children to restaurants, rather than leaving them home with a baby-sitter, so restaurants should not ban children. Being a parent myself, and knowing what it is like to go out to shops and restaurants with two lively young children, I can say I have experienced everything from pride to embarrassment for my children’s behaviour. But should businesses be allowed to prevent children from going into their premises independently of their behaviour, simply on account of their age?

Can the law help us?

Preventing children from entering a business seems to be a clear-cut case of discrimination on grounds of age. Having a teaching and research interest in discrimination law and policy myself, alarm bells rang in my head when I found out a few years ago that my local (fairly large) supermarket only allowed two children to go in at a time. I garnered all the courage I could and decided to go and have a chat with the store’s manager to challenge their policy. The moment I started explaining that I utterly opposed the idea of preventing children from entering the shop, the shop’s manager just looked at me and said: ‘It’s legal.’ And she was right.

The UK’s Equality Act 2010 does prohibit discrimination on grounds of age, but not in relation to provision of services for under-18s. This exception effectively protects the right of shops and businesses in the UK to exclude from their premises anyone under-18. Although there was some lobbying by civil liberties and children’s rights NGOs for the Equality Act 2010 to also prohibit age discrimination against children in the field of provision of services (besides other fields), law-makers apparently saw no need to heed to that pressure. Unfortunately, parliamentary debates and explanatory notes on the relevant provision offer no guidance on why this exception to the principle of equality and non-discrimination is necessary or justified. Although subsequent reforms aimed to increase the protection offered to older people, younger people have remained vulnerable to discrimination.

One suspects that business owners introduce such ‘no children allowed’ policies mainly because they may be legitimately concerned about their property being damaged by careless children. Yet, there are already other legal rules in place to address that concern, namely tort liability rules. Indeed, parents – or any person assuming the responsibility for looking after a child – have a duty to supervise their children in order to protect third parties, and when they fail to do so, they may be held liable for any damage caused. Children themselves can also be held liable in tort under the same conditions as persons of any other age, even if it may be harder to prove intention or carelessness due to children’s capacity being lower than that of an adult. It is true that business owners may fear being held liable themselves for any damage caused to the children, under the Occupiers Liability Act 1957 and 1984, but owners of premises have nothing to fear, as they cannot be held liable when young children ought to be taken care by a third party, such as a parent.

It is also possible that many business owners are concerned about goods being stolen. Again, there are already specific legal rules to address that, namely the criminal offence of theft. And if a child’s behaviour falls short of a criminal offence, it may still be dealt with through an Antisocial Behaviour Order (ASBO). Yet other business owners will be worried about the corporate image they wish to promote – perhaps a stylish and relaxed restaurant for an adult clientele, rather than a raucous atmosphere full of noisy children. Yet, adults can be raucous and children can be calm, so one should not use age as a proxy for clients’ behaviour. As polemics about work dress codes affecting workers with disabilities and female workers have shown, corporate image and the expectations or desires of some clients should not be allowed to trump individuals’ rights and dignity. And it is children’s rights and dignity that are at stake here.

What about the message we’re sending children

Children know they are not allowed to go to certain places, like night clubs. The reason behind such prohibitions relate to the protection of children from environments that may be detrimental to their physical or moral development, for example, due to the consumption of alcohol or presence of pornography. No matter if one entirely agrees with such prohibitions or not, their intention is clearly to protect children. In the case of ‘no children’ policies in shops and restaurants, the intention is clearly different – it is to protect the business, often at the cost of children’s dignity, self-esteem and wellbeing.

It is the role of the law, in particular of discrimination law, to enhance people’s dignity and protect them from being stigmatised. The Equality Act 2010 fails to do that in relation to children who may simply wish to go to a shop to buy a magazine or go to a tea shop with their parents. Prejudiced, negative judgements are being made about their behaviour and capacity to control themselves, when not about their honesty and character, simply on the basis of their age. This is unacceptable and demeaning – it denigrates children and no child should be the recipient of this message unless solid, proportionate reasons can be offered for such child bans. Even if businesses may simply believe that children are not profitable enough clients or not worth the effort required to serve them, allowing business owners to impose a blanket ban on children not for the sake of the children but for the sake of the business is discriminatory, disproportional and should thus be unlawful. Adults are banned from certain venues only based on their actual past or present behaviour – the same should apply to children.

So, it is time to revisit our equality legislation and prohibit age discrimination against children in relation to provision of services. The UK would certainly not be the first to do so – New York state, for example, did so in 1993, and there is a clear explanation online as to how to file a complaint. Perhaps a model to follow?