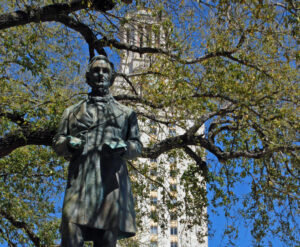 When I arrived at the University of Texas to teach as an academic visitor three decades ago, it seemed a liberal oasis in a conservative state. But, exploring the Austin campus, I was surprised to find a huge, towering statue of Jefferson Davis, the Confederacy president, prominently placed on one of the university’s main drives. No-one seemed to talk about the statue at the time. But recently I learned that plans for it had been controversial long before it was erected in 1933. And in 2015 the statue was removed and eventually relocated in a museum.

Monument controversy has become major news recently in the UK, but has existed in the United States continuously for over a century. Confederate memorials were erected throughout the southern states especially in the late nineteenth and early twentieth century, and in the 1950s and 60s. Many have been removed over the past two decades but, at the same time, laws have been passed in many states to prohibit or impede local removal of Confederate statues.

In June 2020, a presidential executive order was issued to bolster federal powers to ensure protection of monuments. Their targeting for removal, the order noted, ‘reveals a deep ignorance of our history, and… a desire to indiscriminately destroy anything that honours our past and to erase from the public mind any suggestion that our past may be worth honouring, cherishing, remembering, or understanding.’ In the UK, Justice Secretary Robert Buckland has promised new laws to prevent violation of memorials and statues, noting that current penalties are mainly related to repair costs rather than reflecting popular ‘disgust’ at mistreatment of cherished monuments. In preserving collective memories, law is called to play its part.

Of course, it is important to have effective anti-vandalism laws, public order laws that can be invoked against crowds destroying public and private property, and legal mechanisms to preserve national heritage (such as the Ancient Monuments and Archaeological Areas Act 1979). But, as the fierceness of recent campaigns in both the US and UK shows, more is at stake for law in the monuments wars.

In many countries laws exist to protect historical memory (the internationally best known are Holocaust denial laws). Monuments and statues can be considered material embodiments of this memory or symbols of it. They rarely teach history in any serious way but evoke it in vague terms that can often be assimilated by a mere glance. A statue may give a sense of the subject’s physical appearance and a plaque may give clues as to what seemed important to those who erected the memorial. Beyond that, the viewer has to add context. Laws specifically protecting statues are within the category of ‘memory laws’, a category that always courts controversy. Where these laws extend to stopping debate or prohibiting alternative views of history, they are probably also ultimately futile: law is not strong enough to control historical interpretation.

However, because monuments can provoke controversy, certain kinds of laws about them are needed. Thus, some laws protect communal networks (solidary population groups) that are bound together by tradition. Tradition should be understood broadly as the bonds that link people because they live in an inherited environment, which they have been born into or have adopted. Tradition can include shared language, collective memories, history, locality or natural environment. Law serving a communal network exists to foster bonds between all the network’s members. So, if tradition is important to such a network, and therefore important to law, it must be tradition uniting the whole of the network, promoting its overall solidarity.

It follows that the public display of monuments that cannot contribute to such solidarity in the communal network to which they relate ought not to be a priority for legal protection. And, if monuments once did so contribute to solidarity, but no longer do – because their symbolism has changed its meaning, or because the composition of the communal network has changed character, or because the collective memory that monuments reference has itself evolved – law should allow their removal from public space, their relocation in places where they are no longer presented as a communal symbol but now only as a historical exhibit (as in a museum).

Meanings of history change.  Public monuments should be created and removed depending on their contribution to communal solidarity. Law should protect their public display where they celebrate events, achievements or collective experience that the local or national communal network as a whole can share in, and benefit from; but not where they have become deeply divisive and the intentions of those who erected them have become anathema or merely unintelligible to the communal network as a whole.

Law aims to secure public order and to protect private and public property from damage. So it necessarily guards public monuments. But there are no easy general answers as to when such monuments should be lawfully retired – removed into private seclusion. However, the link of public monuments to social solidarity suggests some clear cases. Monuments can come to represent the very opposite of solidarity – not inclusion but exclusion, not social integration but fragmentation and conflict.

Often this is because the communal network to which they relate has changed in character. Its membership has changed, or the bonds needed to unify it are quite different from what they once were. Jefferson Davis, for example, was surely a unifying figure across the slavery-supporting white American South. His statue symbolised its myths and traditions. But the communal network of the white South was slowly forced to change as it eventually became unable to exclude totally from membership the black population that it repressed.

The solidarity of any society or communal network depends on its bonds of membership. Public monuments must be compatible with such solidarity. The issue then for law should be to create mechanisms of ‘due process’ by which the divisive effigies and symbols of slave society and its many contemporary equivalents and descendants may be peacefully retired from public life.