By James Greenwood-Reeves, School of Law, University of Leeds 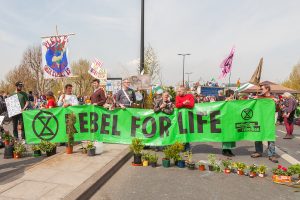 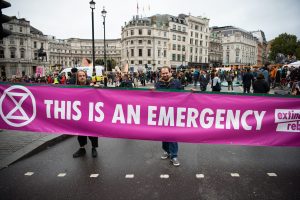 The rebellion has begun. Or so it seems. Extinction Rebellion (“XR”) has become an unmistakable brand in the field of environmental activism, in the UK and internationally. Beyond mere notoriety, they have raised public awareness and heightened public discourse about the climate catastrophe facing us all, and have also achieved concrete policy concessions. Shortly after the mass civil disobedience in the autumn of 2018, the UK government met one of XR’s key demands and was the first in the world to declare a climate emergency. The movement continues to disrupt, engage with and challenge carbon-costly systems across the world.

They do not disobey laws mindlessly. XR draws heavily from literature on civil disobedience – traditional 20th Century Rawlsian views, and more contemporary views like those of Kimberlee Brownlee. They have read up on the theoretical underpinnings of breaking the law peacefully, on being exuberant and colourful, being very visibly arrested: all in order to draw media attention and thereby to highlight to as wide an audience as possible the injustices behind the climate breakdown. XR clearly understands and respects the importance of nonviolence, not only for moral purposes, but tactical ones. Chenoweth and Stephan’s research, into the superior persuasive impact of nonviolent over violent protest, is cited at p.126 of their Handbook. They seem to be playing very much by the civil disobedience rulebook, as it were.

For XR, laws and policies which continue to perpetuate climate destruction fail to meet the principles of liberty, security, equality and justice upon which claims to legitimacy depend. Ergo, laws are worth breaking because the source of their legitimacy is questionable, and the moral imperative to disobey outweighs the moral reasons for obedience. But how do these claims about legitimacy actually work?

My current research frames moral arguments from protesters as legitimacy counterclaims: political-moral arguments made by protesters when they believe that the state’s claims to obedience are failing. A state’s legitimacy claim starts with a) moral principles espoused by the political community, which inform b) state laws which are in keeping with those moral principles, and c) the consequent moral justifiability or legitimacy of those laws, generating moral reasons to obey. If the state fails to satisfy these core moral criteria in their laws and policies, their subsequent arguments for obedience fail to follow. XR are explicit in their approach to legitimacy claim failure in their literature. “When government and the law fail,” they state in their Handbook, “…it becomes not only our right but our sacred duty to rebel.”

A lot of this is premised upon standard liberal-democratic theory: that legitimacy depends upon not mere de facto political power but some sort of moral authority. For a Dworkinian, these could be framed as moral principles, or the “grounds of law” which explain the normativity of laws. For Joseph Raz, these are the “moral principles” that provide constitutional settlements and their laws normative force, “as long as they remain within the boundaries set by [those moral principles].” Meanwhile David Lyons might call them “moral presumptions” which underpin reasons for obeying or disobeying laws. I refer to these generally as principles of constitutional morality, or the moral principles underlying claims to legitimacy that make laws worthy of obedience by morally autonomous actors.

In short, if a state sticks to its principles, makes coherent laws and looks after its people, those laws are worthy of obedience by us as free moral agents. If its laws fail to meet those moral principles, its laws lose legitimacy and therefore citizens have less reason to obey them. Indeed if the legitimacy claim failure is particularly bad, as Candice Delmas’ book title suggests, one might conversely have A Duty to Resist those unjust laws: and disobedience acts as the legitimacy counterclaim.

It is important however to look beyond this liberal-democratic theoretical groundwork, which can seem tiresomely Anglo- or Euro-centric, and cloistered in systemic and structural privilege. When we look to protests by native Peruvian peoples against petrochemical development in their Amazonian homelands, or the Standing Rock protests against the Dakota Access Pipeline, such counterclaims to the laws and policies of authorities are not premised upon whether the state is meeting such-and-such of its own constitutional moral principles. It is a matter of life and death. However, as Abigail Fallon details in her research exploring US indigenous protest cases, sadly, necessity defences on the part of native peoples’ civil disobedience are rarely entertained by the courts.

The liberal-democratic theory behind civil disobedience fails to reflect the lived reality of groups who are excluded from decision-making, who are under-resourced and deprived of political power. It is particularly painful given that people in poorer countries and communities overwhelmingly face the brunt of climate injustice globally through rising water levels, food insecurity, droughts and other hazards.

State-centric conceptions of civil disobedience also fail to reflect the transnational reality of climate change, a global challenge requiring global cooperation. We need to decentre civil disobedience theory, both from the global North and the state itself. XR ask us to consider global theories for global injustices. Simo Kyllönen suggests that we seek grounds of political obligation beyond Rawls’ purely national conception, in a global public good of environmental stability that is logically prior to local political obligations of obedience. Owing political obligations not to states, but to our fellow humans, may be the key.

We must still try to understand environmental protest’s role in a democratic society – acts of extreme violence would also threaten the moral principles to which civil disobedients appeal. But their aim is not to subvert democracy: their aim is to empower minority groups, legitimise state solutions to global problems, extend beyond the confines of national political obligations, and to consider our political obligations as global citizens with mutual interest in a healthy planet.