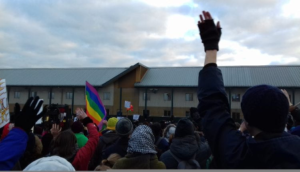 In September 2017, the BBC’s political programme Panorama showed footage filmed secretly inside one of Britain’s immigration removal centres, Brook House located near Gatwick airport. It revealed a toxic culture in which detainees, including asylum seekers and foreign national offenders who have already served their sentence, are kept in prison-like facilities, sometimes for months or even years.

The BBC’s documentary, Undercover: Britain’s Immigration Secrets, showed wholly unacceptable instances of physical and psychological neglect and abuse. In one segment of the footage, a custody officer is seen choking a detainee, whispering in the man’s ear: “Don’t move, you ****ing piece of ****, I’m going to put you to ****ing sleep.”

While the practice of holding people in immigration detention facilities for indefinite periods has drawn considerable public attention in the past, what exactly goes on behind the walls of these facilities remains relatively invisible. This is why immigration detention is such a pressing human rights issue. And this is why the public inquiry into the mistreatment of detainees in Brook House, which began almost exactly one year ago, is so important.

A range of investigations into the abuse at Brook House took place following the broadcast of the documentary on the BBC. Amongst them, an inquiry by the Home Affairs Committee found that the Home Office had failed in its duty to protect the individuals detained in Brook House.

But it was only in November 2019 that a high court judge ordered for a statutory inquiry under the 2005 Inquiries Act to be held. One of the aims of this public inquiry is to investigate if any of the acts in the Panorama footage contravened Article 3 of the European Convention on Human Rights.

Public inquiries are normally set up by a government department in response to public interest in a matter. This inquiry is different as it was ordered following a judicial review, against the wishes of the Home Office. Despite, or perhaps because of that, there is a clear need for a thorough public inquiry into the abuse in Brook House in order to reveal what is hidden by the lack of transparency within the immigration system and to increase public awareness of immigration detention.

The purpose of the Brook House inquiry is clearly set out in its Terms of Reference. It is to investigate the mistreatment of detainees broadcast in the BBC Panorama programme in 2017, taking into account the circumstances, decisions and processes that surrounded it.

While the inquiry is focused on the time frame in which the Panorama programme was filmed, the Chair – Kate Eves – said in her opening statement that she will consider the wider context of immigration detention if needed.

Specifically, it is tasked with focusing on any evidence of mistreatment contrary to Article 3 off the ECHR, namely torture, inhuman or degrading treatment, or punishment. In particular the inquiry will investigate:

Whilst the Inquiry was set up last year, it was only on 25 September 2020 that it held its first open hearing. Due to Covid-19 it was a virtual hearing, streamed on the Inquiry’s YouTube channel.

In her opening statement in April 2020, the Chair stated clearly that the ‘treatment revealed in the Panorama documentary was shocking and has no place in a decent and humane immigration detention system.’ Her determination to find out what happened seemed to be welcomed by many. But during the first virtual hearing, considerable matters of disagreement became evident. We are highlighting three:

The effective participation of so-called Core Participants are crucial to any public inquiry. More than just witnesses, Core Participants can be represented in an inquiry’s legal matters and help shape its direction.

At the start of the Brook House inquiry, 16 organisations and individuals applied, but only twelve were granted Core Participants status by the Chair – including former detainees and the contractor G4S. After the first preliminary hearing in September, the charity Medical Justice was added to this list. However, the applications from three further non-governmental and migrant support organisations were refused (Bail for Immigration Detainees, Detention Action and INQUEST).

The Chair’s reasoning, in part, relied on the fact that their work was not directly pertinent to the Inquiry’s purpose. They would, instead, be asked to provide evidence as witnesses.

But there is a problem with this argument. By her own admission, the Chair sees the success of the Inquiry tied up with the testimony it can gather from former detainees in Brook House. Many of them, however, maintain close relations with support charities while at the same time, understandably, having a deep distrust of public authorities. The Inquiry has to be careful that it does not undermine the confidence of groups and individuals who can act as gatekeepers to the people who really matter here.

A strong sense of frustration was clear when it came to discussing the Inquiry’s timeline. While Covid-19 had obviously led to considerable delay, this wasn’t always the sole factor.

Legal representatives acting for the former detainees who had argued that their mistreatment amounted to a violation of their human rights were keen to stress that the delays put into question the Inquiry’s legal obligation. A critical element of any investigation of an Article 3 violation is that it acts promptly. This is seen as crucial for maintaining public confidence in authorities and their willingness to be held accountable for unlawful acts. Delays to the Brook House inquiry thus have severe consequences for its ability to fulfil its purpose.

Stephanie Harrison QC of Garden Court Chambers, acting for one former detainee, sought to put this in its context:

[as] a result of intransigence and opposition from the Home Office to any effective independent investigation does […] the Inquiry had a particularly important and heavy responsibility to act speedily and effectively in getting this Inquiry up and running, and by admission and acceptance it has failed to do so.

For the Chair, the delays were best explained by the impact on Covid-19, although she admitted that the original timeframe that had been set for here had always been ambitious.

Evidence hearings are now scheduled to take place in June 2021 resulting in the likelihood of a full report being published in 2022. With this timeline, it will have taken up to five years for a full Article 3 compliant investigation to have been conducted into the alleged human rights abuses in a British detention centre.

A final area of disagreement existed over the nature of a potential undertaking to be sought by the Inquiry from the Attorney General. An undertaking would mean that no evidence provided by persons to the Inquiry will be used against in any criminal investigation and/or proceedings against that person.

Undertakings can increase the likelihood of participants bringing evidence forward as individuals may be concerned about self-incrimination. But should this be extended to legal persons, i.e. the Home Office and the private contractor that operated Brook House at the time of the documented abuse? For the former detainees, this would further compound the sense that those responsible can evade justice.

An undertaking that extends only to natural persons in this Inquiry could potentially protect those who are most vulnerable and whose insecure immigration status may be affected by any criminal investigation.

A further preliminary hearing of the Brook House inquiry is due to be held on 14 December. It is inviting submissions on the scope of the Inquiry, a matter of far-reaching importance for the recommendations the Chair can make beyond the specific instances that were filmed for the BBC’s Panorama programme. But the crucial issue will be whether it can retain the confidence of its Core Participants and of the victims of abuse.