COVID-19 had a huge (somewhat inevitable) impact on all medical services. It was alarming, however, how quickly changes were made to pregnancy and birthing services such that the rights and protections that should be afforded to pregnant people were disregarded. A number of issues in care provision that were distressing to pregnant people made headlines including a prohibition on partners attending appointments and scans, a prohibition of birth partners on labour wards pre- and post-delivery, and suspension of a number of birthing services – such as home births. There were also concerns raised in relation to a potential increase in the occurrence of unconsented vaginal examinations before and during labour.

It is important not only to recognise the difficulties experienced by many pregnant and birthing people during the pandemic, and to attempt to understand why these occurred, but also to actively consider what could be done to prevent this reoccurring in the future. While we have been research-active as ethico-legal scholars in this area, we believed that this needed to be a broader conversation. This is why we decided to host a series of two workshops (that were very kindly funded by the SLSA) to bring people together from different academic and non-academic backgrounds to facilitate ‘looking forward’ conversations about not only what happened and why, but to discuss ideas about how we could work together to ensure positive change. The first of these workshops, the subject of this blog, focused on unconsented VEs.

In attendance at the event was a virtual scribe who was able to document the conversations that were had, and to produce images around the key themes that we identified. In this blog we centre our discussion around the image produced that traced the conversation.

While vaginal examinations are seen as a routine part of the medical monitoring of birthing people they should only be performed if the birthing person provides free and informed consent[1] (which they are under no obligation to do). However, it is clear that in practice vaginal examinations are often performed without the healthcare professional asking for consent, or where consent has only been given as a result of coercion or pressure from staff or because birthing people were not informed of their right to say no to this intervention.

These examinations have lasting impacts on individuals, and are particularly distressing for people who have experienced sexual violence or other traumas.[2] It is difficult to establish the scale of the problem, but as Camilla Pickles explained in her introductory talk at our workshop, we know from the lived experiences of many pregnant people that this is a global issue.

Discussion of vaginal examinations in the absence of valid consent is inherently complex and considering it as purely a legal problem is insufficient and unhelpful in understanding how and why unconsented exams happen, and in thinking about how we should respond to and deter them. Legally speaking, valid, informed consent is needed in order to render such a vaginal examination lawful.[3] In criminal law, vaginal touching without consent would also be a battery and/or (potentially) a serious sexual offence depending on the circumstances.[4] Professional guidance is also clear that informed consent is central to good healthcare practice. Despite this, the practice of VEs performed without asking for consent, or on the basis of legally defective consent (as a result of coercion or lack of information) continues. Camilla Pickles, in her talk, urged that to understand why this is happening we need to ask “what, in the healthcare context, normalises vaginal touching without consent?” It is clear that healthcare institutions are normalising and perpetuating this behaviour and the performance of unconsented/inadequately consented exams is potentially rooted in broader social norms – such as societal expectation that the ‘responsible pregnant person’ or ‘good mother’ acquiesce to medical advice and treatment. The superior status that is afforded to healthcare professionals also potentially compounds the problem. Pickles suggested, very aptly, that “a woman’s treatment in childbirth tends to reflect her broader situation in society.”

It is important to add, however, that just because the practice continues despite the law does not mean that the law is not an important tool in addressing the practice. While law can be blunt instrument, the harms experienced by those who have a vaginal examination imposed upon them are significant, and it is vital that there remains a legal avenue for redress and recognition. However, taking a legalistic approach alone will do little in the way of tackling the problem; doing so requires us to consider the cultural and social context, and the patriarchal and hierarchical structures that healthcare systems are founded upon.[5] Taking social factors into account helps us to best identify a legal response that can better protect people and their interests. This is what we hoped that discussion at the workshop would help shed light on – how we tackle this problem given its socio-legal and medico-legal nature.

Reflecting on the Workshop:  Key Themes

The discussions in the workshop were broad – ranging from what it means for consent to be meaningfully informed, to the question of whether it would be helpful to create a specific criminal offence related to obstetric violence, to conversations about how to conceptualise and recognise the harm caused – potentially as a form of gender-based violence. The totality of these discussions is captured (beautifully) by the image produced by the virtual scribe. 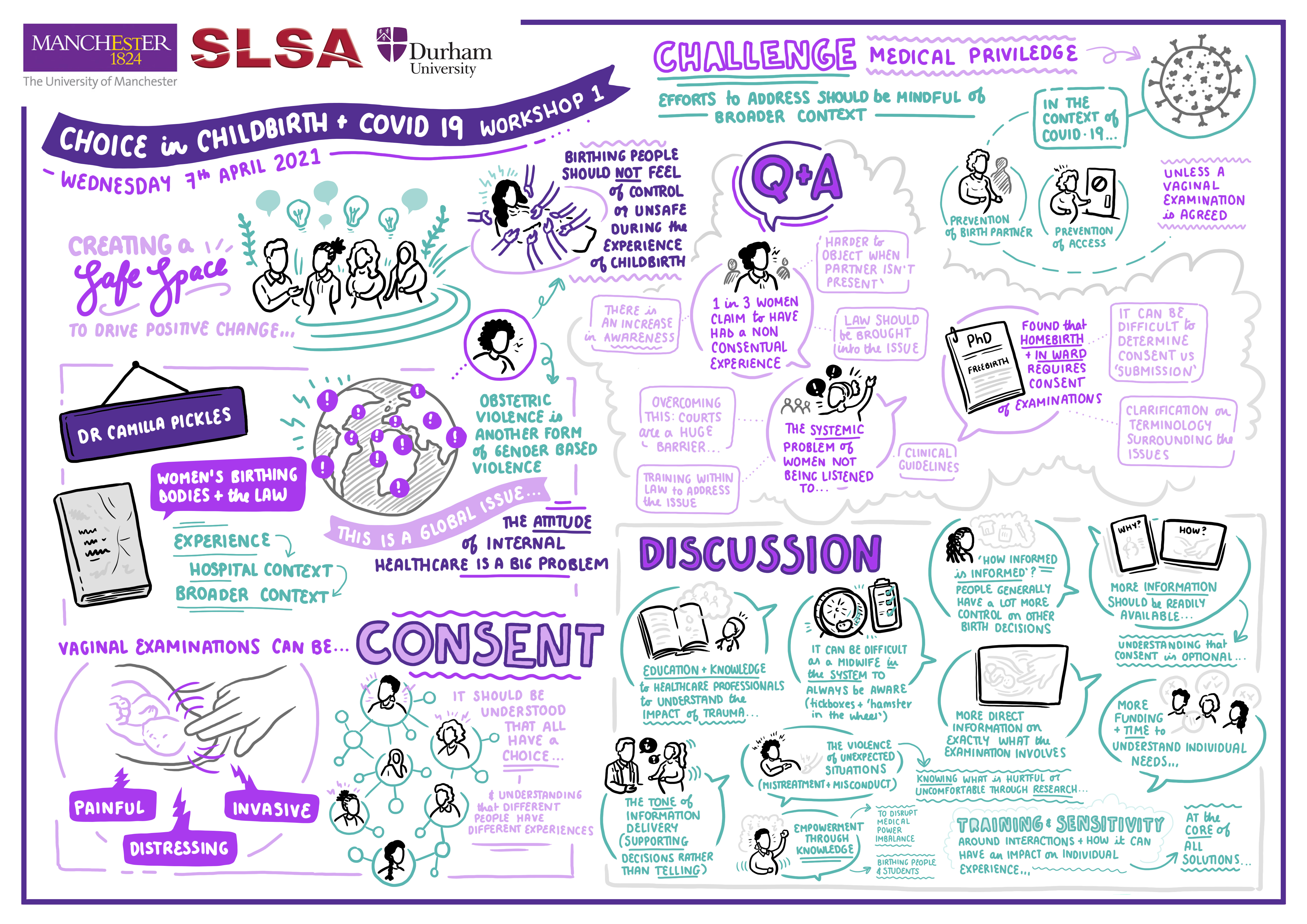 Based on our reflections at the end of the workshop, and the image produced, we identified three key themes that emerged across the conversations, which we will reflect upon in the next blog in this series:

It is crucial to emphasise that these are not exhaustive themes when it comes to unpacking the issues associated with unconsented vaginal examinations. Rather, this workshop and the discussions that were had therein, were simply a ‘conversation-starter’ and much more work is needed to further explore the themes we identify.